This is an adventure your sims can do in China.

"Greetings. My name is Lin Hua. I require an outsider's assistance in a particular matter I am not quite ready to discuss with you. I promise you it will ultimately be worth your while. Please, explore the Dragon Cave fully. I do not know what you will find, just that you will find it." 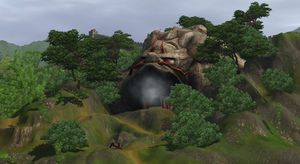 Dragon Cave (aka The Dragon's Maw), the rather hard to miss huge cave that looks just like a dragon, close to the center of Shang Simla.

Medium - No real danger, but a lot of secret doors.

The reward for this adventure is: 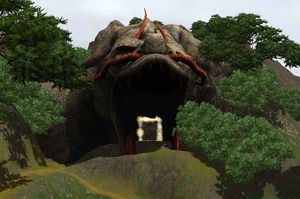 1. Enter the Cave: Go to the Dragon Cave, at the top of the steep winding road near the center of Shang Simla. Go up to the door inside the Dragon's Mouth and Inspect it. The door will open. Having gained entry, your sim can go inside. Go down the stairs. 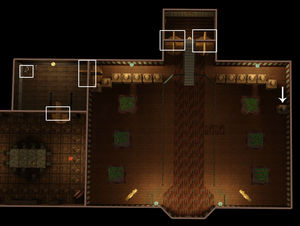 2. The Room Behind the Stairs: The stairs lead to a room divided by fences with plants in small square ponds. There's a row of statues on both sides. The statue at the very end on one side is moveable. Pull it back twice to allow you access to the walkway behind the row of statues.

Pick up the Ancient Coins and Inspect the wall beside the stairs to reveal a secret door.

Inspect the wall at the far corner to open yet another secret door to a wood-lined room.

Pick up more Ancient Coins and break the rubble pile to find a tomb hole. Inspect it to open - yes, another secret door. 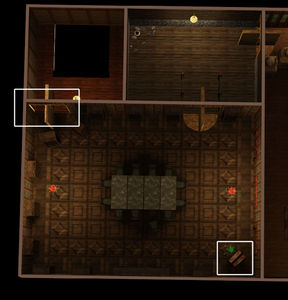 3. The Secret Dining Room: Pick up the collectible off the table, and loot the chest. Inspect the wall behind the out-of-place bookcases to find a secret door, and a double staircase leading down. Go down the stairs into a room with barrels. Pick up any Ancient Coins and then go through the door. 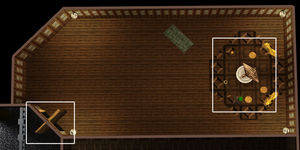 4. The Treasure Room: Pick up the treasure around the statue and inspect the shorter diagonal bit of wall to reveal a secret door. Go through the door. 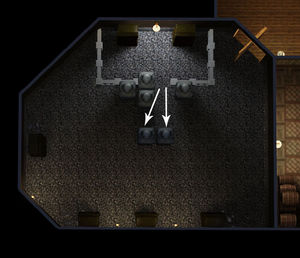 5. Lots of Rocks: Clear the three rubble piles in this next room.

To move the statues out of the way, Pull Far one at least two tiles back, and then Push or Pull it 1 tile to the left or right. Then Pull Far the statue that was behind it.

Look Inside all the sarcophaguses to gain some nice treasure. 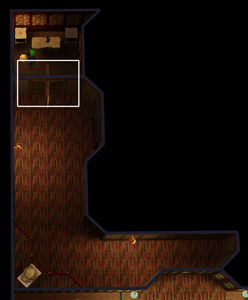 6. A Bent Room: Pick up any ancient coins, then Examine the wall at the end of the hallway. Pick up the treasure from inside the room behind the secret door. Go back into the hallway and through the large stone-framed door. 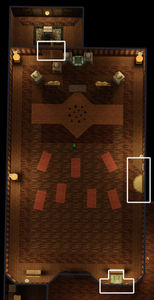 7. A Mysterious Vision: As you walk into this room, you get a popup:

Deep within the dragon cave, YourSim has a vision of a mummy and it appears to be... an adventurer fighting with each other? Return to AdventureGiver and describe the vision. Perhaps AdventureGiver can decipher its meaning.

Now, at this point you could leave, but why not explore further?

This room has several obvious (and thus harmless) fire traps and an obvious floor switch behind a bench.

Stand on the floor switch to reveal the tomb holes nearby. Inspect them for some minor treasure. Pick up the Ancient Coins on the pedestals and the gem on the table.

You'll also notice a door requiring a Keystone. Unfortunately, you'll need to complete another adventure (in France!) to get the Keystone you require to open this door0.