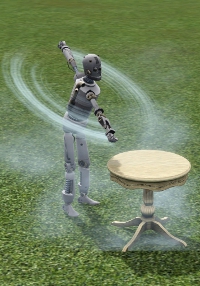 SimBots are robots, reminiscent of the Servos in The Sims and The Sims 2. Simbots can be either gender, and they come with a small range of metallic finishes. Newly invented SimBots have a smooth metallic finish, and SimBots ordered through the New Best Friend lifetime wish look rusted and banged up. SimBots cannot be edited in Create-a-Sim without mods. All SimBots come with the Hydrophobic trait, which means they don't shower and can't swim. If a SimBot gets wet it will breakdown for several hours. SimBots also come with the Inventing and Handiness skills. Simbots have little jets on their soles and will hover along instead of running.

In lieu of the usual sim motives, Sim Bots have special, robot motives.

SimBots can WooHoo, but cannot have children. In terms of interactions they can show off their features, discuss oil brands, and insult puny human brains. If Late Night is installed they have access to a unique Mixology drink called the Oil Coolada. SimBots have long lifespans but they can die and become ghosts.

There are several ways to acquire a SimBot, or even to make your active sim into a SimBot.

My Best Friend - This 40,000 point lifetime reward automatically gives the household a SimBot with the best friend relationship status. However, these SimBots have rusty skins and seem to live less long compared with invented SimBots.

Mystery Invention - This is a chain of opportunities unlocked by having a level 10 Inventing skill. In the end the inventor creates a SimBot that counts as part of their family tree, either a son or daughter.

You will then receive a Life Core and be told to create a Mystery Invention. Invent the SimBot using the Scraptastic Workbench, it will appear as a random gender. After creation, you will be asked if you want to adopt the SimBot or release it into the wild. Adopting it causes it to be part of your household. Releasing it will cause it to become a townie. After you create your first SimBot, you can go back to the workbench and create more provided you have the aforementioned ingredients. You will also be able to choose its gender.

SimBots can turn their arms into whirring rotor blades and smash objects into piles of scrap, which is their food source.

SimBots can regain their social motives by talking to small appliances.

SimBots are perhaps the easiest sims to change traits on, as whenever they short out from contact with water, other sims have the option to reprogramme them with five new traits.

First of all you will need Treeag's Simtransformer and Twallan's MasterController. Now that you have them, load a saved household or start a new one. You can build a Sim Bot or Spawn one with the Simtransformer. Click on the SimBot > NRAAS > MasterController > Advanced > Edit in CAS. Once it has loaded you may now edit the SimBot to make it look like a regular sim. The SimBot only uses Everyday clothing so it is only necessary to edit that category, a pre-made sim can also be used in this case. Note: By doing this you can remove the Hyrdophobic trait. Once finished save the changes and ta da you have a Humanoid SimBot in your household!