This tutorial will cover how to use the localization methods in TS3's core, and how to build the STBL resources to store the related strings. It will do so by a concrete example, but it will not cover how to embed that example in a complete script or how to get that script executed in an object mod or scripting mod.

If you came here after going through the object modding tutorial, going through it successfully that is, you probably couldn't help but why the pie menu button of your interaction was blank. This is exactly the point where this tutorial carries on.

Before you read on, be aware that this tutorial is NOT an introduction on how to write mods for TS3! It won't explain how to write the code for an object mod or script mod beyond the localization code. If you're new to modding, please refer to Tutorial:Sims_3_Pure_Scripting_Modding and TUTORIAL: Object Modding (aka adding interactions).

An STBL, a string table, is like a C# dictionary. It has a certain number of entries and each entry consists of key and value. You use the key to fetch the value you want to show in the game. You use string keys in the code, these will be hashed to ulong values and these hashes must be in one of the string table entries. Trying to access an entry that doesn't exist, won't cause an exception, though. ;)

It doesn't matter in which STBL an entry is; for the game only the keys matter. So unless you deliberately want to override an existing string, your string key must be unique in order to lead to a unique hash value!

Let's just get going. It will all be clear if we just look at an example interaction.

There are three strings in this interaction:

Right now, they're hard-coded; that means no matter in what language the player plays Sims3, the output will be the same. We will change that.

The game code already has everything we need to do all the "fetching of the string" earlier mentioned. Look at Sims3.Gameplay.Utilities.Localization and there especially at

Without any further delay, just look at how to use these methods:

As you see, all the hard-coded strings are now replaced with method calls. Let's look at the call in GetInteractionName():

The second parameter is for things you want to give the Localization method to build the final string. As you see it's just an empty array in this case, as there are no dependcies on the actor or target of the interaction.

It's a bit different for the call in GetPath():

The last parameter is still an empty array, but now we pass the isFemale right through to the Localization method. We'll see later what to do with that.

In Run() we have yet another different call:

We now pass the target sim's gender as first parameter, and the whole target sim as part of the third parameter.

Skip this part if you don't use twallan's STBL compiler.

Open a text editor and copy and paste this:

You should immediately recognize the keys in the <KEY> tags. The part in the <STR> tags are the strings. Of course, you need to change the keys to match what you wrote in the localization calls.

Plain and easy. That's just the same as the original hard-coded version, just that you can change it for the other languages now.

This one looks a little different than the original hard-coded string, just to show the point of the isFemale parameter. MA/FA stands for "Male Actor"/"Female Actor". I'm actually guessing the "Actor" part, but you get the idea. The game will parse the expression and if the isFemale paramter is True, it will insert the string between '{FA.' and '}' in the final string. In this case the final string would be "Grumpy Interactions". If isFemale is False, the final string will be "Whiny Interactions". Not difficult, right?

Ok, what about {0.SimName}? The expression tells the localization code to insert a sim's name at that position and to get that name from the object at index zero, i.e. the first object, of the parameters array in the method call. Take another look at the method call if you don't remember it.

Now save the file in UNICODE format to your project folder, copy STBL.exe to that same folder and drag&drop the text file on STBL.exe; it will compile the file to an STBL file. 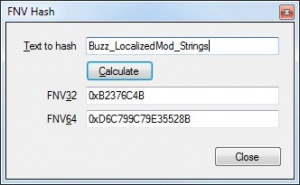 The STBL will be added to your package, but it's still empty. Right-click on the STBL resource, and select "Replace...". Navigate to your project folder, select the STBL file STBL.exe created and click on Open.

I don't need to tell you that the FNV64 hash of "TwoBTech/LocalizedMod/SayHello:InteractionName" is 0xEFCFE0322BC7EB08, right?

Save the package and give it a run in the game.

It can be a pain to find errors in localized coding, because the devs changed the core to show empty strings instead of the localization keys with some patch. The best and only advice is to use a core mod that changes that behavior back, twallan's ScriptError mod does that.

Should be very obvious what paramters need to be passed for each.