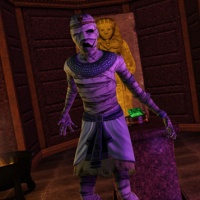 A mummy guarding some treasure.

Mummies are occult sims native to Egypt. They are very slow moving, and covered in old rags that will catch fire very easily. If a mummy catches fire it will instantly die. Mummies are also very absorbent, and will get the Soaked moodlet just by standing in a puddle. NPC mummies found in tombs can potentially give sims a curse that will eventually kill them. Mummies cannot be accessed in Create-a-Sim with mods, so they typically cannot be recolored. However, mummies do come by default in a range of patterns. Sims from teen up can become mummies, however summoned mummies are always elders.

Getting an NPC Mummy

A sim being cursed.

Mummies can be found in Sarcophaguses in Al Simhara when your sims explore tombs. They may come out when triggered by something nearby (like opening a certain treasure chest) or when your sim opens the sarcophagus to peek inside.

Mummies move slowly, but pack a big punch - if a mummy catches up to your sim, it will attack. A Mummy Snack in the sim's inventory (purchasable from the Special Merchant in Egypt) will prevent a mummy from attacking. Tomb mummies have 5-10 Athletic skill and 5-10 Martial Arts skill, which factors in to who wins the fight. If the mummy wins, your sim will be rendered unconscious and can be cursed. If your sim wins, the mummy will disappear in a puff of smoke and leave a pile of dust which can be cleaned up.

If a sim gets cursed they receive a moodlet that Mummy's Curse Moodlet lasts for 2 weeks. Stage 1 effects start at 11 days remaining, Stage 2 at 3 days, and Stage 3 effects begin at 4 hours remaining. Eventually the screen will have a heavy black border whenever the cursed sims is active. Once the moodlet expires, the sim will die. The only way to prevent this is to lift the curse before the moodlet expires. There are a variety of ways to cure the curse:

Getting a Playable Mummy

Summoning a Mummy with Relics - If a sims own any sarchophagus alongside the Canopic Jars five piece relic collection they can summon a mummy to join the active household. This consumes the relics.

Bottled Mummy Curse - Sims can brew an elixir to make an instant mummy of themselves of others. This requires a Crypt Moth, Scarab Beetle & Black Goldfish.

Blessed Sarcophagus of the Kings.

Cursed Sarcophagus of the Kings.

To be cured of Mummyism, a mummy sim must sleep in the Blessed Sarcophagus of the Kings for at least 13 hours.