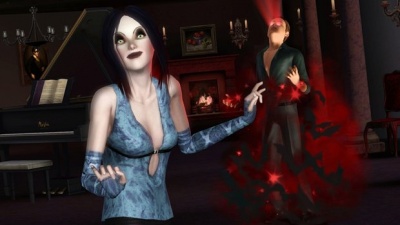 Female vampire in the foreground and a male changing into one in the background.

Vampires are plasma-drinking sims that gain buffs at night and have hypnotic and psychic powers over mortal sims. Unlike in The Sims 2, sunlight will not kill a vampire, but it will slow him or her down severely and also make them smolder. Although very slow to age, vampires are also no longer immortal by default. Instead, vampires must now earn immortality through the Immortal lifetime reward, which unfortunately also makes them sparkle in sunlit. Vampires are almost instantly recognisable from normal sims due to the soft and unhealthy glow their skin has. They also tend to have bright, flashing eyes, and you will notice when they eat or laugh that they also have sharp fangs.

Ask a Friendly Vamp - If you meet an existing vampire and wish to join their legions of the undead, just get close to them and then ask them to turn you. This will start as an itchy bite and gradually progress across three days until you become a vampire in a flurry of red light and bats. They will only bite the neck of a sim they are in a romantic relationship with. If the willing victim is just a friend then they will bite their wrist.

They do age, but much slower (about 5x) than normal sims.

They can go 'on the hunt'. This option appears by clicking on the ground in a place where other sims are present. The vampire will look around and identify the best-tasting sim in the vicinity. This sim will show up under their relationship panel with a purple background, and they can be identified on the map by an icon, meaning that your vampire will always be able to find the best blood without having to look for it.

They can run super fast and they have unlimited stamina while working out.

Vampires can read other sims' minds to find out their traits, career, favourites, relationship, and sign, though there is a cool down period between doing this. They can also make another sim think about them, which increases the success of social interactions.

Although they can go out in the daylight without dying, it comes at cost. After one hour the Heating Up moodlet will appear. During this time the vampire's body will smoke. After three hours the Heating Up moodlet will turn into a costly two day long Too Much Sun moodlet. The sim will also pass out, at this point, from sun exposure. During the Too Much Sun moodlet a vampire sim will not have access to Vampiric Vigor.

They can raid the hospital for packs of Plasma Juice, or the grocery store for Plasma Fruit. Plasma Juice aquired from hospital raids spoils at the same rate as those from the fridge, making them worthless for trips abroad. Plasma Fruit, like other fruits, do not spoil in the inventory. During a Raid both locations have comical messages displayed pretaining to what's going on inside.

Vampire sims can eat real food, but it does not effect their Thirst motive. They like tasty plasma.

They can drink Plasma Juice and Plasma Orange Juice from the fridge (under Quick Meal).

They can also eat Plasma Fruit, which is essential if the vamp has the Vegetarian trait. When a sim becomes a vampire some of these fruit arrive via mail, and they can be purchased at the grocery store.

While regular meals will NOT satisfy the Vampire's thirst, meals made with Plasma Fruit (Plasma Pancakes, for example) will. To make plasma meals: If your Sim only has plasma fruits in their inventory and fridge, and try cooking, the Meals that can be made with plasma fruits will have no prices, and when cooked and eaten will quench the Vampire's thirst (And their leftovers can be stored in the fridge as with any regular Meal). When dining at the bistro a vampire sims' thirst motive will be replenished. Plasma Fruit Chowder can also be purchased from the food trucks.

They can feed off other sims by clicking on the sim and choosing the Drink interaction, however this will be rejected if the relationship between the sim and the vampire isn't high enough. The sim who has been drained will have lowered energy in the form of a moodlet. To get the best plasma, the vampire should go 'on the hunt', and then drink from the sim they identify. This results in a stronger and longer lasting feeding moodlet (+50 and 8hrs) than drinking from just any random sim.

If you've had enough of playing a creature of the night, your sim can be cured by taking a visit to the Science Facility and purchasing a bottle of the cure for $3,000. They don't have to drink it right away; it can be stored in their inventory until needed.