In lots of the descriptions of operands for various primitives in SimAntics, you will see the following description, "operands 1 and 2 give the low and high order byte respectively". What exactly does this mean? 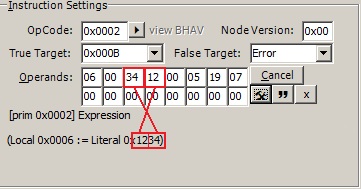 An illustration of byte order in SimAntics. This picture shows that the bytes of a number are provided in the reverse order from how humans read numbers.